After our amazing first couple of days in Italy, it seemed like nothing could top the experiences we’d already had. How could something beat the views? The awesome towns? The delicious food and wine?

We spent a day with a local tour guide walking around Cinque Terre, which is a small area consisting of five towns built into the coastline along the Italian Riviera. These little towns are picturesque, with the classic (at least to my mind) image of Mediterranean coastal towns: lots of multi colored buildings built into what appears to be the side of a mountain. 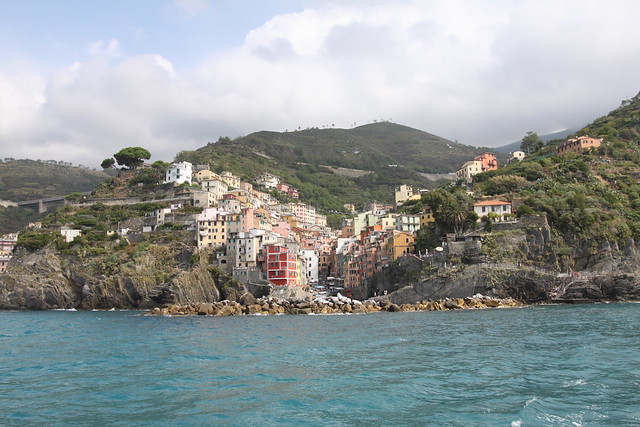 It is rumored (no idea of its accuracy) that the houses are all painted different colors so that when the men were off working in the sea, fishing, or perhaps on their way home, they could easily look back and know which house was theirs and thus which house had their wives and children inside them. It’s a nice thought, isn’t it? 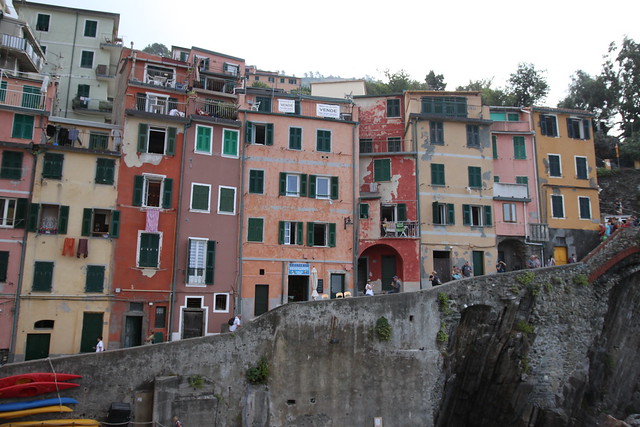 We only ended up visiting three of the five towns, a fact that to me simply means I have to go back one day. Each of the little villages was similar, consisting of narrow winding roads, steep stairways, and laundry hanging from windows. Each village also had unique features, from the size, to the steepness, to the popularity, to the beach access, to the specific types of food. I really enjoyed walking down the tiny, narrow paths, up steps upon steps upon steps, and hearing the stories about the residents pouring boiling oil from the second or third floor of their homes onto the Pirates who routinely got lost among the narrow streets. 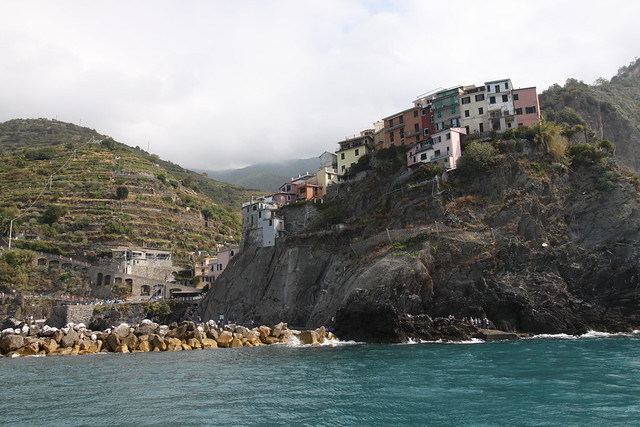 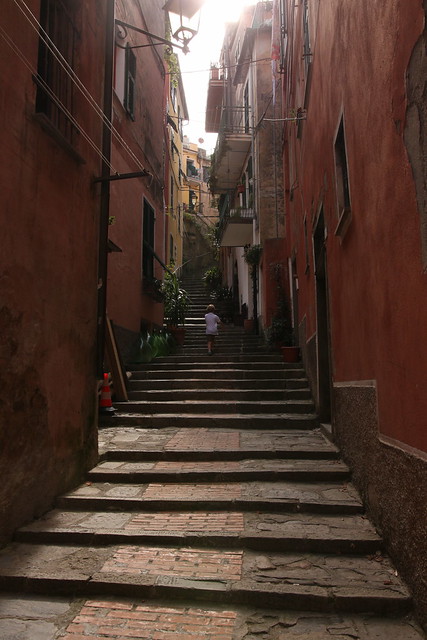 There is a trail you can take between each and every town, and otherwise the towns are only accessible by train or a very narrow, not recommended to traverse, road. When the towns were built, the only access was by foot or by sea. 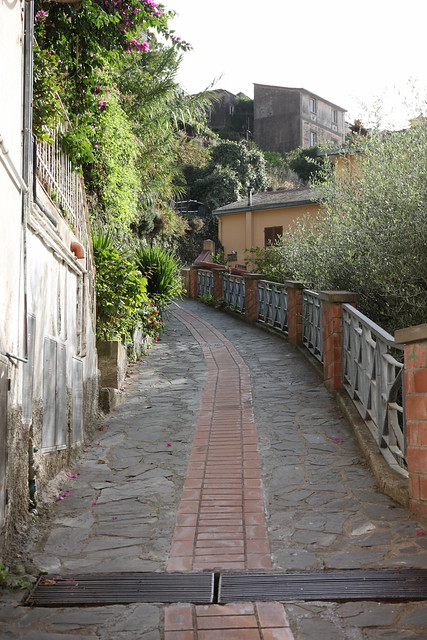 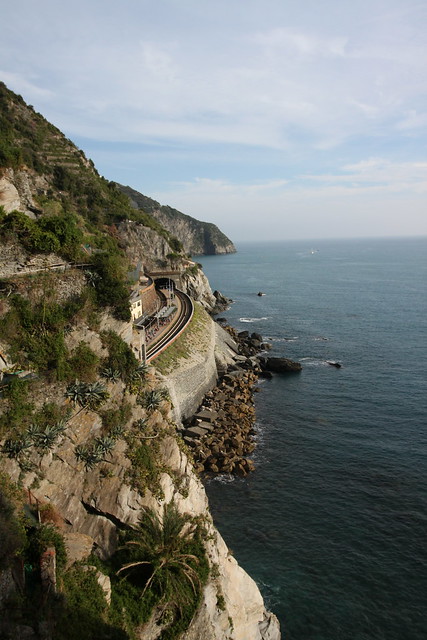 When we reached the second town on our stop, we had to put our feet in the Mediterranean Sea. How could we not? The water was warm, and blue, and just…perfection. The pictures don’t do it justice because I’m a total amateur, and the haziness of the day really made it tough to capture some of the amazingness of it all. I swear to you, though, the water was a blue I’ve never seen before. It reminded me a bit of the Caribbean, but a deeper blue. 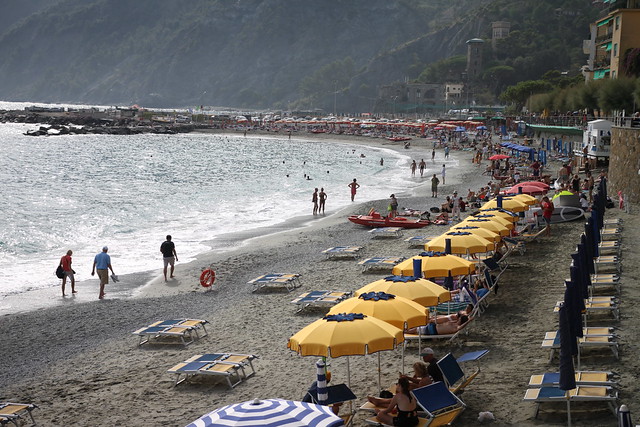 Alex started off just putting his feet in, but that quickly became a laughable endeavor of staying dry. His shorts got wet, his shirt got wet, and pretty soon we let him take his shirt of and he ended up totally submerging himself in the waves. 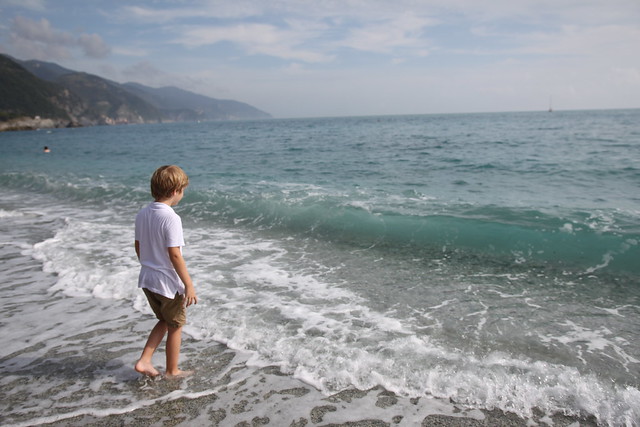 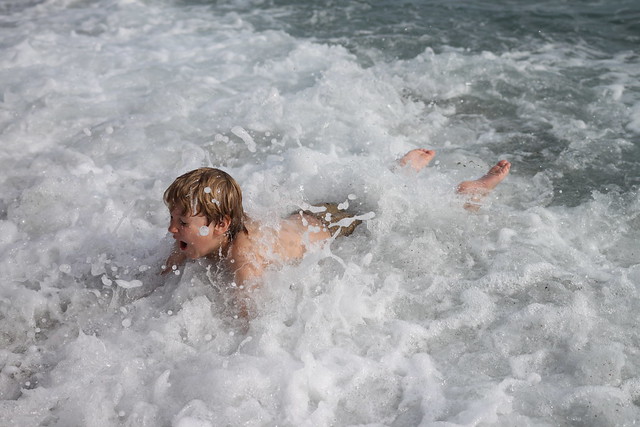 After so many busy days, we had a day of rest: a day of hanging out by the pool, a day to do laundry, snack, read, and recover. The pool was a bit chilly, but was so clean, salt water!, and so crazy beautiful as it overlooked the mountains and farm land and the small personal vineyard. 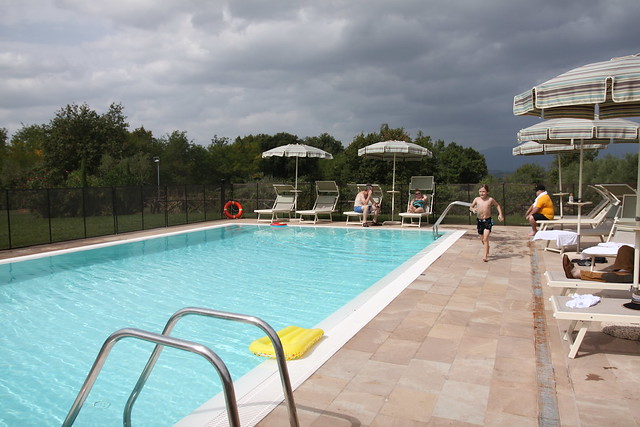 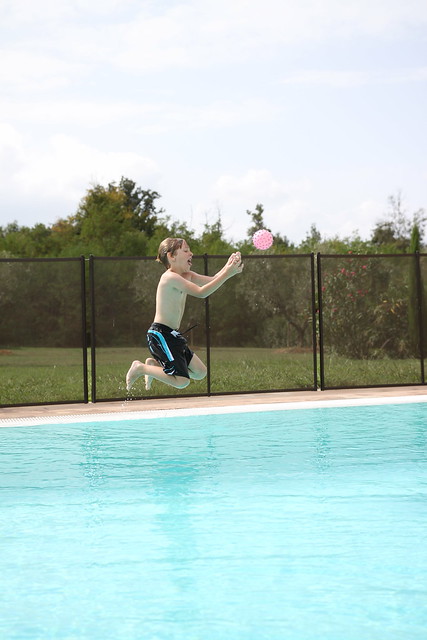 Alex, of course, loved this day. While he found some aspects enjoyable in our busy days of walking around and doing tourist-y things, he was so happy to have a day at “home” to relax. 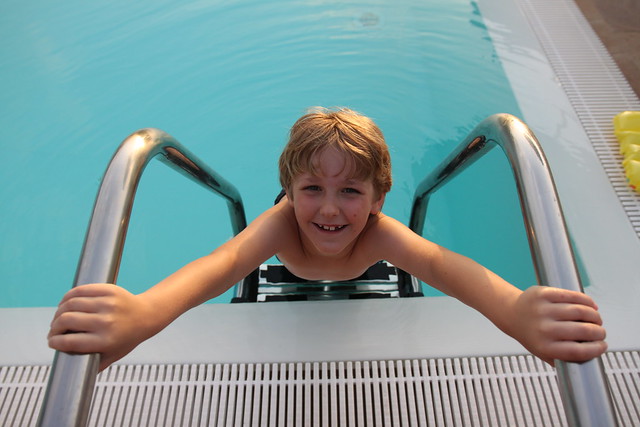 As if the day couldn’t have been perfect enough for Alex, we ended the evening with a five hour Pizza Making Workshop with a real chef! 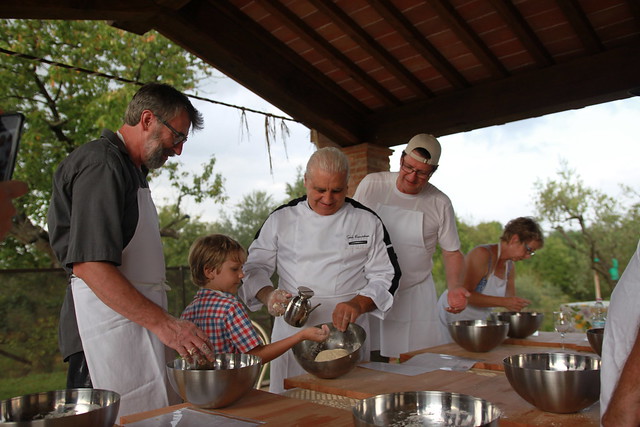 We made the dough from scratch, and got to enjoy cheese, wine, cecina, a chickpea flour flatbread that was so good I wished I could eat one whole pan of it, while we waited for the dough to rise. 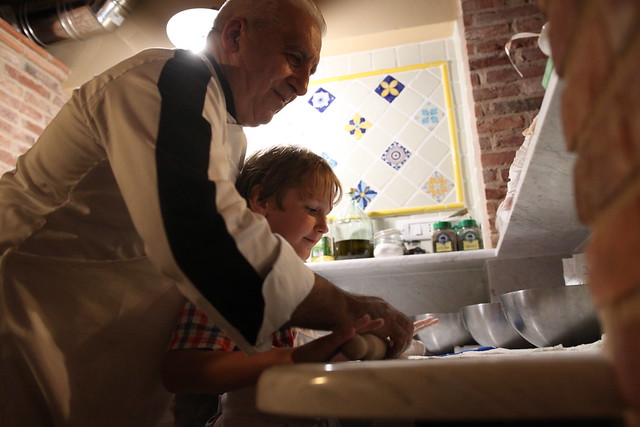 Each one of us got to make a pizza, picking as many toppings from the beautiful array of meats, cheeses, and vegetables, as we wanted. 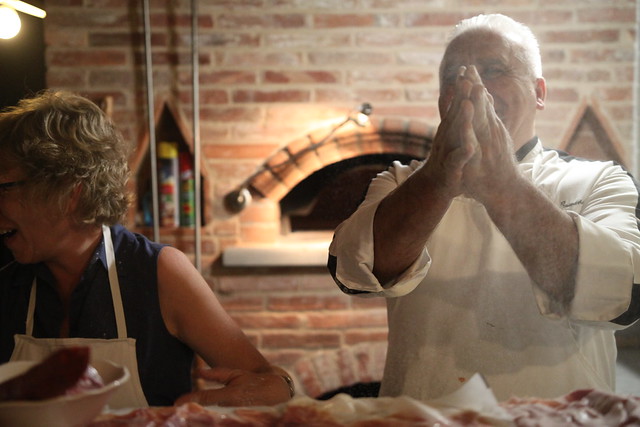 In the end, we were handed certificates, indicating that we “passed” the Pizza Chef Workshop. 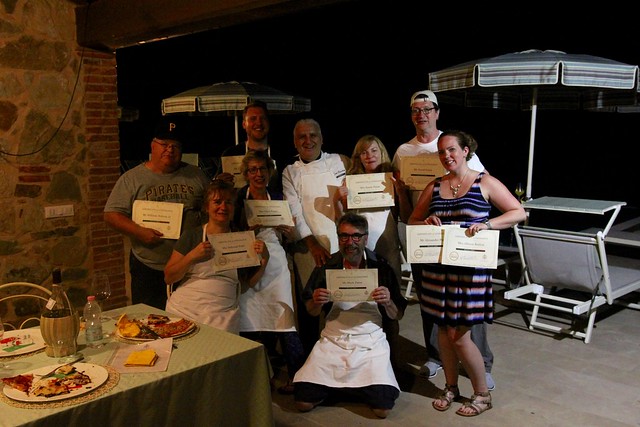 It was a great night, and we all went to bed stuffed. Between the appetizers, our home made pizza, and then the chefs making us a few different dessert pizzas to try (nutella, sugar, pear and cheese!), it was a great way to spend our last night in the Villa.

The next day, we packed up. We said goodbye to the amazing villa, drove about an hour away, and spent a few hours in Florence before taking a train to France the next morning. I could easily have spent another day or two wandering around the beautiful streets of Florence, but even the limited time we were there was lovely. The shopping alone could have been an all day activity! 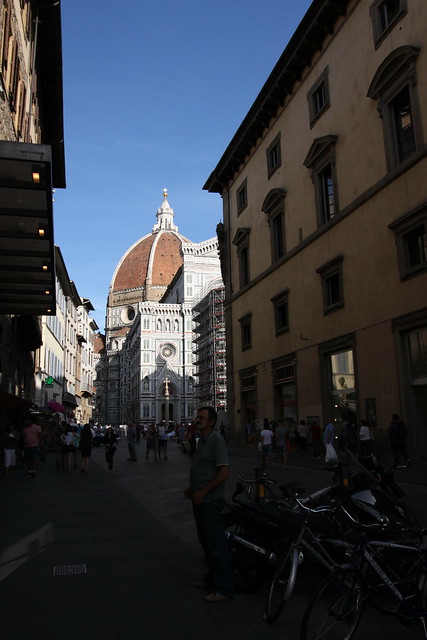 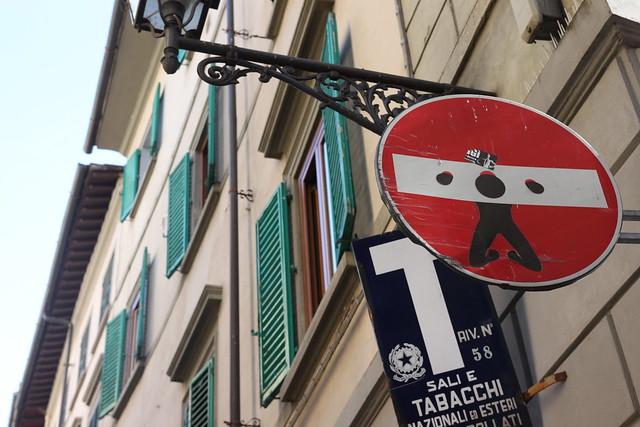 Florence was cool. The artists, the craftsmen, the gorgeous buildings, the religious history, the bridges, and, of course, the street vendors. 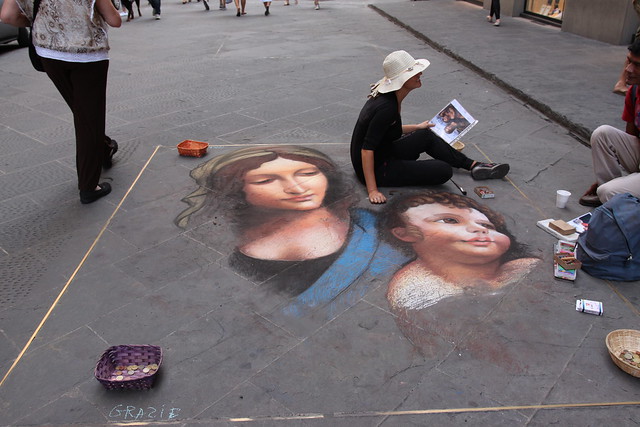 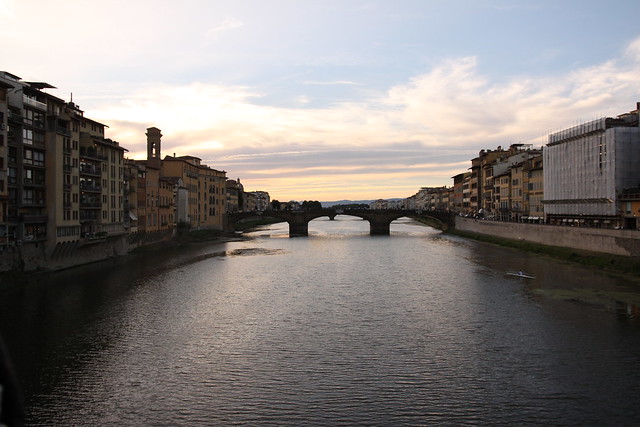 We definitely got sucked in, as a group, to the street vendors selling all sorts of goods, and ended up buying a few things. Alex found a bag, eyed in on it right away, and wanted it so badly. “For my friend here? 100 dollars,” is how the conversation started with the salesman. Alex, of course, nodded and said, “YES!” instantly. Laughing, we got the vendor down quite a bit, and Alex ended up really, really, happy with his purchase. He also learned a bit about haggling, a very important lesson that school would not have taught him. 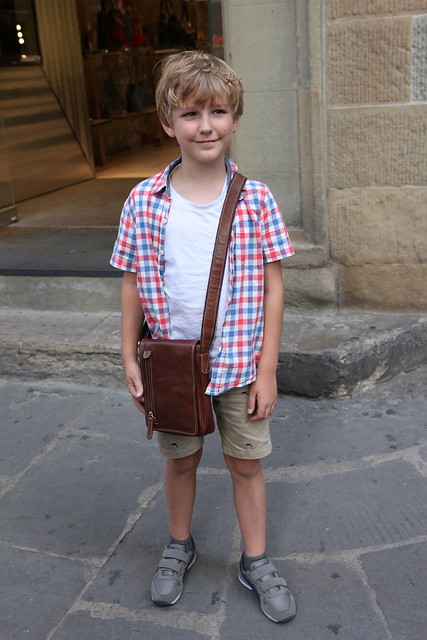 All in all, I couldn’t have been happier with our time in Italy. The only thing that would have made it better would have been more time, but for our one week stay? It was pretty much perfection. Delicious food, wine, a happy child, really beautiful sights, and an opportunity to experience just a touch of another culture. 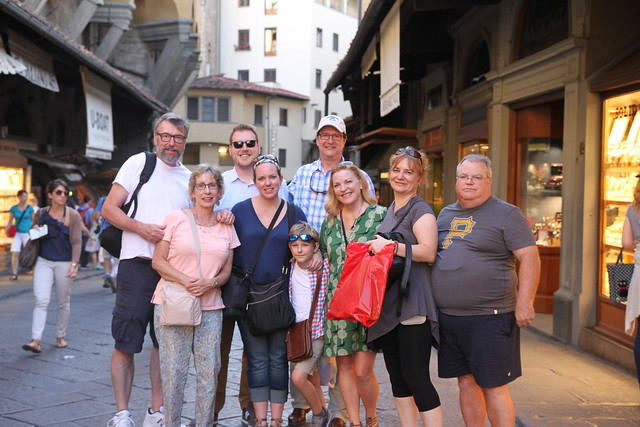